Some points to ponder and remember from yesterday’s Khutbah:

Those whom they call upon, themselves seek the means of access to their Lord– whoever of them is nearest– and they hope for His mercy and fear His chastisement; surely the chastisement of your Lord is a thing to be cautious of. Al-Isra ayah 57.

Some hadiths regarding a believer living in a state of hope and fear:

“Fear & hope are like the two wings of a bird.

But if one is stunted, the flight would also be stunted.

And to be sure, if the two are lost, the bird will soon be in the throes of death.”

Musnad Ahmed & Tirmidhi have a report narrated by ‘A’isha (RA):

She said: “I said, ‘O Messenger of Allah! Concerning the verse – “Those who give out of what they have been given, but their hearts are fearful (Al-Mu’minun, 60)” “Is it talking about someone who commits adultery, drinks wine & steals?”

He replied – “No, O daughter of Siddiq. It is speaking of a man who fasts, prays, gives in charity but is fearful that all that might not be accepted.”

Hasan al Busri said: “They acted, by Allah, obediently, striving hard, but feared that their efforts might be thrown back at them. The believer combines extreme piety with fear. On the contrary, the hypocrite combines evil acts with self-satisfaction.”

Tirmidhi: Hadrat Anas (ra) narrates that Allah’s Messenger (saw) once visited a young man who was at death’s door. The Prophet (saw) asked him, “In what state do you find yourself now?” The young man replied, “O Messenger of Allah! My state is that I am hopeful of Divine Mercy, but, at the same time, there is fear of punishment for the sins (I have commited).” The Prophet (saw) remarked, “Believe it, in whose heart the two feelings of hope and fear are present at the time of death, Allah will surely grant him what he confidently expects from His Mercy and keep him safe from the punishment he fears in his heart.” 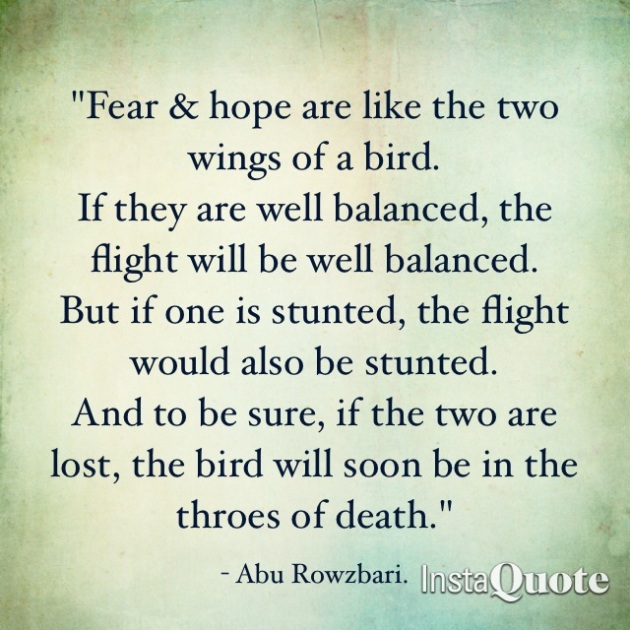 “Indeed I have presented for people, in this Qur’aan, every kind of parable. But humans like to argue more than anything else.” [Qur’an, 18:54]
We are often so caught up on how things should be that we don’t stop to enjoy the things that are.
It’s easy for us to fall into the trap of Shaitan. Just because we pray, fast, and give charity, we think we are good but in fact we are showing up bankrupt the minute we talk behind someone’s back, gossip, slander, focus on someone else’s deeds but our own. Don’t show up to the hereafter without any deeds left to show.
“The mutual rivalry of accumulating diverts you, until you visit the graves.” [Qur’an, 102: 1-2]
Pride is often destructive to self.
“. . . and let them pardon and overlook. Would you not like that Allah should forgive you? And Allah is Forgiving and Merciful.” [Qur’an, 24:22]